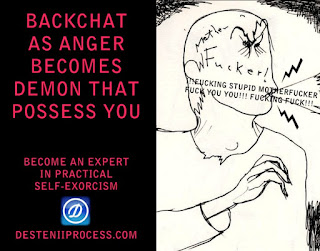 
I forgive myself that i have accepted and allowed the Backchat of „Fuck this, hrrgh, fucking shit“ to come up and exist within my mind when i am faced with a failure or something not working the way i wanted or planed it with the Backchat being accompanied with and attached to a energetic experiance of Anger, Frustration and Irritation.


I forgive myself that i have accepted and allowed myself to connect a energetic experiance of Angst, Frustration and Irritation to the backchat of „Fuck this, hrrgh, fucking shit“.


I forgive myself that i have not allowed myself to see, realize or understand that this Backchat is in fact a Programm of Giving Up (on myself) and then justifying it through projecting Blame towards whatever „was not working out“ or „a failure“ accoring to my Judgement/imagination.


I see, realize and understand that in abusing myself and physical reality within projecting blame and anger i do not support anything or anyone – all that i do is accumulating the Mind and in this creating Limitation and further consequence for myself.


I see, realize and understand that the solution for Moments/Situation where  something goes wrong/doesnt work out is to simple check what was the cause, why did what i imagined/wanted not equate in physical reality – where in this i also check my starting-point – and if it is something vaild and worthwhile, i simply do it again within considering and correcting the source/orgin of failure/not working out – For this i do not need energy and thus i commit myself to


When and as the Backchat of „Fuck this, hrrgh, fucking shit“ accompanied with an energetic experiance of Anger, Frustration, Impatience and Irritation comes up in my mind – i stop and breathe – i do not allow myself to participate in this self-sabotage, accumulating further limitation/consequence but rather assist and support myself in doing again what did not work out or where i failed within considering and correcting the cause/origin of the failure and so assist and support myself to learn.


I forgive myself that i have accepted and allowed the Backchat of „Fucking shit“ to come up and exist within my mind, which is basically a short form of the self-sabotage above, where i blame „something" for not working as i wanted, going wrong accoding to my judgement or failing, and in this justify giving up, whitout giving myself the opportuity to look into and find out what it actually was, that caused the failure.


I see, realize and understand that another dimension to consider within this is me deliberatly not wanting to face „my failure/s“ so that i can continue with them/it, as there is a particular Self-interest included and so it is convenient to just blame „something“ to justify accepting myself doing the same over and over again.


I see that i derive a Sense of power and superiority from blaming and and for example saying „Fucking shit“.


When and as i see that that i project blame in the Backchat „Fucking shit“ to make myself feel superior in my Mind – I stop and breathe – I realize that actually, in that moment of blame, i am disempowering myself and giving up on myself and a moment that i could have utilized to learn and expand my skills or ability in whattever i am/was doing – Thus i commit myself to take a breath, delete the Backchat and give myself a moment to Look at the situation/moment again, clear, stable and in Commen Sense how i can support myself to enhance my application and then walk the practical Correction.
"I hate this shit"


I forgive myself that i have accepted and allowed the Backchat of „I hate this shit“ to come up and exist when faced with specific things or tasks that i do not like or not particularly want to do, apparently as i see that in fact it is more that i project „hate“ because i do not feel „confident“ or „good enough“ to do it, „It went all wrong in the past, so many times“ and thus „i hate it“, wherein i am actually saying that „I fear this“ things or task but this i would not want to admit because it would make me feel/look like a loser.


I forgive myself that i have accepted and allowed myself to think and believe taht „Hate“ is Cooler than „Fear“ and thus created from the Failure-Charakter and the fear of failure within it a branche as the „I hate it“-Charakter as an „new self-definition“ of „My Failure“ Perception.


I see, realize and understand that Hate is not cooler than Fear and in fact projecting hate to apparently protect me from failure is pretty stupid as then i will not face and learn from my failures, but try to separate myself from the Perception of Failure.


I see, realize and understand that in Hate i conserve the Perception of Failure and make the statement that it – a perception – has power over me and who i am.


Thus i commit myself to not allow the Perception of failure in my mind to control, determine or have power over „who i am“.


When and as i see the Backchat of „I hate this shit“ come up in my mind – i take a breath, stop the blame and taking responsiblity for what i apparently hate, giving myself the confidence and trust to do it.


„I will never get this“


I forgive myself that i have accepted and allowed myself to have the Backchat of „I/You will never get this“ come up and exist within an whiny voice, wherein i give up on a point/myself before i even started and condem myself to „eternal failure“, including the the word „never“ and so including a Lie as never is to a long time for the sentence to be practically real – and so what i do here with the this Backchat, is making Life unneccesarily harder vor myself.


I see, realize and understand taht the Backchat that „I/You will never get this“ is a lie and if/as i push myself to try again and put in the necessary work, i will, dependent on the Point sooner or later „get it“ - Thus


I see, realize and understand that this is more a generalised Self-sabotage-construct to allow giving up and accept Limitation.


Thus – When and as i face the Backchat „I/You will never get this“ come up or exist within my mind – I take a breath and assist and support myself in not listening to Mind, giving in or giving up and so in this accepting limitation/struggles, but rather move myself in awareness physically here, where the question of giving up/giving in doesn´t exist as what exists is me as Self-movment pushing through any resistance or doubt in breath.


I commit myself to stop whining, when and as i see it within and as me in realising that there is no Choice but to move and whining dosn´t support me in this.
Eingestellt von Andi um 01:33